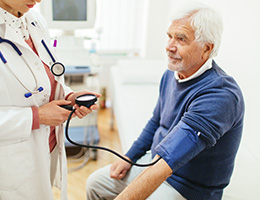 For five years, researchers followed more than 9,300 adults 50 and older who had high blood pressure. The goal was to see if intensive blood pressure control could reduce the risk of developing mild cognitive impairment (MCI) or dementia.

The results: Lowering systolic blood pressure to less than 120 mm Hg cut the risk of developing mild cognitive impairment (MCI), but not the risk of dementia.

MCI is a well-known risk factor for dementia. Those with MCI have more trouble thinking and remembering than is normal for their age. But their symptoms are not as severe as people with Alzheimer's, the most common form of dementia.

The study is the first indication that there may be a way to significantly reduce the occurrence of MCI, according to the National Institutes of Health, which funded the study.

But as encouraging as these results may be, there are still no proven ways to prevent or delay MCI, the researchers cautioned.

The study appeared in JAMA.

Learn what you can do to help bring your blood pressure down to a healthy level.