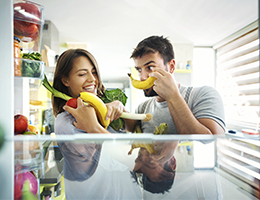 Nov. 25, 2019—Can improving your diet improve symptoms of depression? A small study out of Australia suggests that it might be a good tool to add to your treatment plan.

The study involved 76 university students ranging in age from 17 to 35 years old. All of them had moderate to severe symptoms of depression. And they all had a diet high in processed foods, sugar and saturated fats.

The students were divided into two groups. One group continued their regular diet. The other group was briefly taught how to improve their diet and given a basket of healthy foods and money toward future groceries. Researchers twice checked in on each member of the second group via phone calls.

Each student was scored on depression, anxiety and overall mood at the start of the study and again when the study ended three weeks later.

At the end of the study, those who had changed their diet showed a significant improvement in mood. Their levels of anxiety were lower. And their depression scores had dropped into normal range. There was no change in these areas for the group whose diet remained the same.

Researchers followed up with 33 of the students three months later. Those who had remained on the healthy diet—which included fewer processed foods and more fruits, vegetables, fish and olive oil—maintained their improvements in mood.

The researchers concluded that diet changes could be a helpful addition to other therapies in treating depression.

Future studies would need to confirm the results in a larger, more diverse group of people—and identify which interventions were most helpful.

The study was published in the journal PLOS One.

Looking for ways to improve your diet? Explore the Nutrition health topic center for tips.